We are pleased to congratulate 999 Academy Founder Member Rob Horton who has been awarded the prestigious Queen’s Ambulance Medal (QAM) in the 2019 New Year’s Honours.

Rob is a Responder Manager and Paramedic with the South Western Ambulance Service Foundation Trust, based in Exeter.

He is only the second recipient of the QAM within SWASFT, with just 14 medals having been awarded within ambulance services across the UK since its Royal Warrant in 2011.

Rob strongly believes in the benefits of community volunteering and is actively seeking opportunities to develop both the 999 Academy and enable other initiatives within the Ambulance Service. 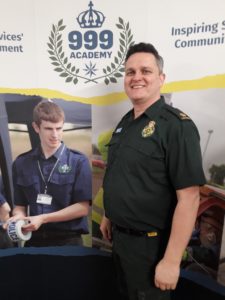 Ken Wenman, Chief Executive South Western Ambulance Service NHS Foundation Trust, said; “There is an amazing amount of talent and dedication here in the South Western Ambulance Service and Rob is the absolute testament to that… I believe the 999 Academy has been one of the most significant initiatives aimed specifically at young people in the South West for many years. He has a great deal to be proud of as we are of him for receiving this award.”

For the first time two 999 Academy programmes joined together to deliver the residential experience for students and leaders. The residential is […]

Our latest Twitter posts from from all 999 Academy branches.